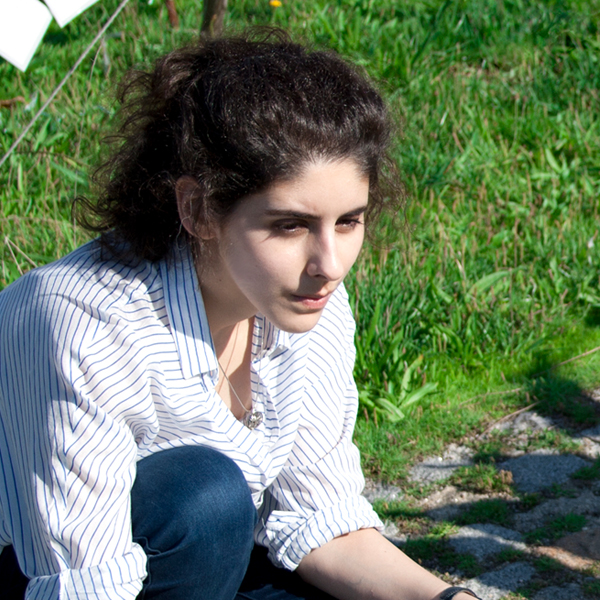 b. 1989, Portugal | Lives and works in Porto | Adélia Santos Costa is an Artist, has a grant from the Foundation for Science and Technology and is a Collaborative Researcher at i2ADS – Research Institute of Art, Design and Society. Has a Bachelor in Fine Arts – Multimedia (2012) and a Master in Art and Design for the Public Space (2015) by the Faculty of Fine Arts of the University of Porto. Her master’s thesis ‘The Scripto-Monument as a poetic and utopic instauration – Monumentality in the era of the dematerialization of art’, addressed the monument problematic as an inscription device of the human being, by the creating artistic interventions in the public space that privilege social inclusion through processes of intensification of written messages capable of being elevated to the monumental condition. In this project, she collaborated with the Municipal of Porto, in a project associated with Carregal Garden (2014); the São João Hospital of Porto and its community (2015); Casa da Música as part of the 10th Anniversary Celebrations (2015); and with the São Pedro da Afurada community (2015). She is currently developing a research and artistic practice within the scope of her Ph.D. in Fine Arts. Her practice is marked by an interdisciplinary research that equates writing as monument as a relational, performative and inclusive potency framed in Art in the Public Space, in a critical, theoretical, artistic and ethic perspective. In recent projects, she has been selected for the ‘Visiting Student Programme’ at Chelsea College of Arts of the University of Arts London. Under the supervision of the critic, theorist and historian Dr. Jo Melvin, she developed a research project about the ineffable written word in the monument, having also contacted with prominent art spaces and institutions such as Chelsea Library Special Collections, University Archives and Special Collections Centre of London College of Communication and Central Saint Martins College of Art, which allowed her to further explore her Ph.D. theme. She also had the opportunity of contacting with artists from the international scene. Her artistic work has been presented in several formats, namely in collective and individual exhibitions in institutions, museums and galleries in Porto, Foz Côa, Vila Nova de Cerveira, Vila Nova de Gaia, Braga, Guimarães and London. Moreover, she regularly participates as a speaker at seminars and colloquiums, contributing to the publications of articles, essays, exhibition catalogues and graphic projects. She was invited to collaborate and carry out research (from Portugal) in the context of the ‘Raymond Abellio Encounters’, having presenting her work in the ‘II International Colloquium of Art and Knowledge: Research from Raymond Abellio’ (2016), in France; was also invited to make an oral presentation in the ‘Colloquium on Public Art in the Era of Digital Creativity’, promoted by the Catholic University of Porto (2017). Has also participated in oral presentations at the ‘II Conversations on Artistic Research’ (2019) and in the ‘Iv International Meeting of Reflection on Community Artistic Practices’. In addition to her artistic practice, she has also produced and directed artistic interventions and performances in the public space (2013-2021). She has developed an uninterrupted artistic and research career since 2010. Stand out projects with the following institutions: Prelada House (Porto), Museum of the Faculty of Fine Arts of Porto (Porto), Art Map (Braga), Body + City (Porto), Biennales (Vila Nova de Cerveira e Vila Nova de Gaia), Gnoc Gnoc (Guimarães), Painel Gallery (Porto), Goldsmiths Gallery (London), Palacete Pinto Leite (Porto), Fundação da Juventude (Porto), Arts Laboratory (Guimarães Capital of Culture), among others. She is currently working in a collaborative project with the ‘Frontier of Peace Memorial’, in Vilar Formoso, with the FCT support, as part of her Ph.D. research.

Theses title
Scripto-Monument: The written word as encounter and reenactment in artistic practice – analysis and experimentation based on memorials

Abstract
In the last decades, memorials and counter-monuments have emerged as critical forms of evocation and reenactment of memory in public space. These practices, opposing the evocative and commemorative logic of the monument, have also created new ways of language using the epigraph as a performative and relational device. This project explores the meaning of writing on monument with a focus on the use of the word as relational performative strategy in memorials, monuments and counter-monuments associated to conflicts and collective traumas – in particular, those related to the Holocaust – having as principal centre the Fronteira da Paz Memorial, in Vilar Formoso, and similar European monuments/memorials. Throughout a practice-based artistic research, the thesis analyses and experiments new relational models of writing and the apprehension of the epigraph in the public space, exploring its critical potential of encounter and reenactment, through a performative writing capable of creating the reality which nominates itself.