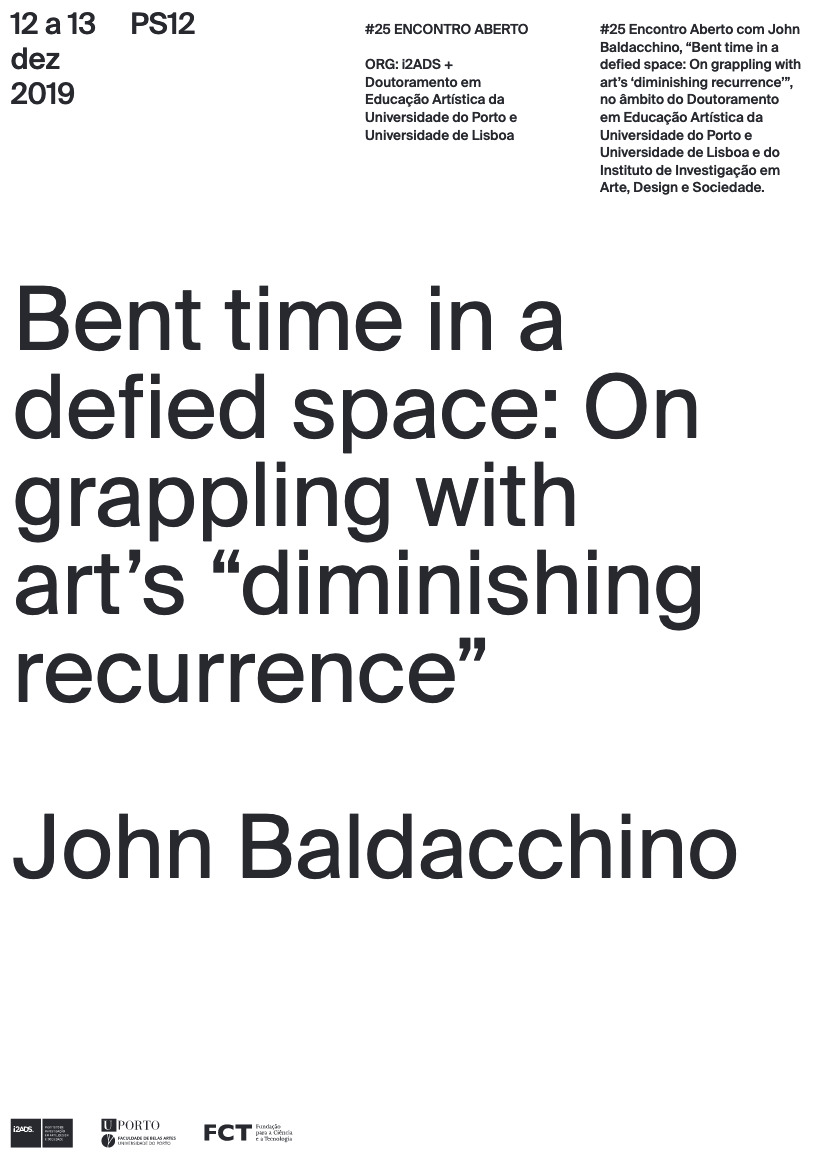 Bent time in a defied space: On grappling with art’s “diminishing recurrence”

In my texts on ped(ago)gy and unlearning, I question two main issues which we often assume to be taken for granted in art: that of (1) a space (agon) of learning, which in art is inherently problematised by (2) the specificity of manner/demeanour that enables us to approach the world through a process of active “recurrence.” With Nietzsche and Deleuze in mind, here I say “recurrence” and not “return”, because while we possess art’s manner as that by which (historically and pedagogically), we assert what we claim to know and have gained over identifiable processes that become “pedagogical”, art’s pedagogy comes to us by art’s manner, where, as I have argued (in the essays you have read), it also requires us to wilfully forget a directional or incremental notion of development, while at the same time recognizing the historical space within which art bends time and defies space in its agonistic possibilities. Thus as I would continue to argue that art’s main aim is to “talk” itself out of existence (as I have done in my book «Art as Unlearning»), here I would like to explore what does it mean to implore art’s “talk” as a form of realization that happens in the act of a recurrence through which it seeks its own diminishing self. This “diminishing” state  is not simply a demise or retreat, but an active way of rejecting that by which art is expected to justify itself as an act that grows and seeks the progress of its meaning and thereby justification in places like politics, the school, society, religion, etc. Most of this would not make sense if discussed outside art’s practice “in se”—that is, as a unique way by which women and men can assert their immanence, and for which they are ready to sacrifice their very own existence.

_
John Baldacchino is Professor of Arts Education at the University of Wisconsin-Madison, where he also served as the Director of the Division of the Arts between 2016 and 2019. A graduate of the Universities of Malta (B.Ed) and Warwick (MA and PhD) he was a member of faculty at Columbia University in New York, and the universities of Dundee, Falmouth, Robert Gordon and Warwick in Britain. A specialist in art, philosophy and education, he is the author of many journal articles, reviews and catalogue essays, and journalistic contributions. To date he authored fourteen books, which include Education Beyond Education: Self and the imaginary in Maxine Greene’s Philosophy (2009); Makings of the Sea (2010), Art’s Way Out (2012), John Dewey (2014) and Art as Unlearning (2018), the latter including several papers that he originally presented at the Facultade de Belas Artes at the University of Porto. He is the editor of Histories and Philosophies: The International Encyclopaedia of Art and Design Education (Wiley 2019). His new volume, Educing Ivan Illich: Reform, Contingency and Disestablishment, will be out in 2020.