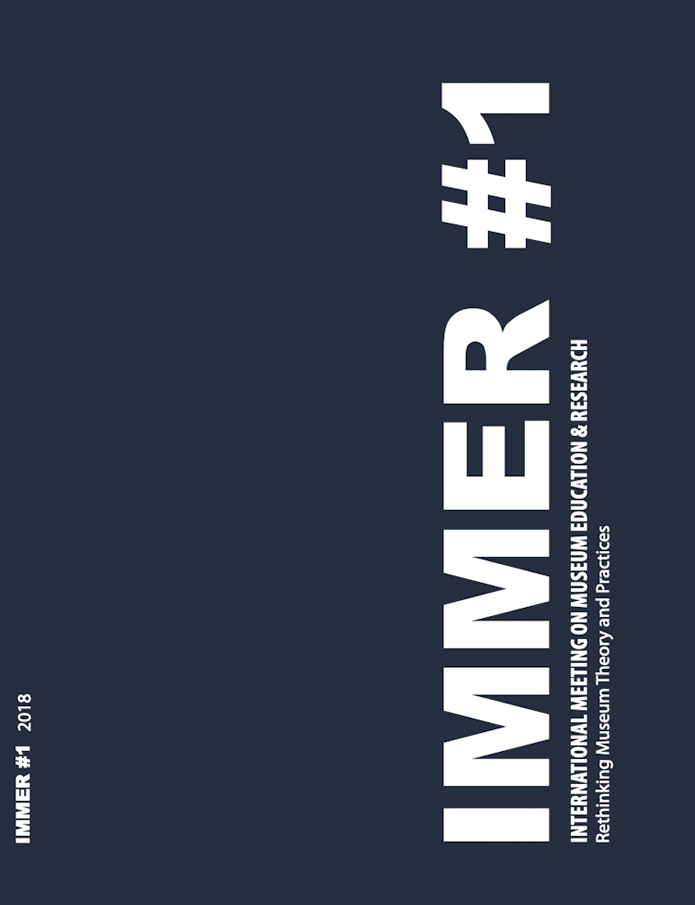 This publication comes out of the first edition of IMMER #1 International Meeting on Museum Education & Research.

The publication now being introduced seeks to materialize the assembly of intertwined discourses that shaped the first edition of IMMER – International Meeting on Museum Education & Research. Rethinking Museum Theory and Practices, a meeting that took place in the context of the doctoral programme in Arts Education of Faculdade de Belas Artes da Universidade do Porto, produced by i2ADS – Research Institute in Art, Design and Society, in partnership with Fundação Museu do Douro.

IMMER was conceived with the purpose of creating a time and a space dedicated to the sharing and confrontation of experiences, in a broadened perspective of the interpenetration of discourses between theory and practice, focused on the educational territory in museums or other cultural structures – about its practical possibilities, assumptions, challenges and setbacks. On the one hand, it aimed to establish an informed field of practices and projects that have been referenced at an international scale and, on the other hand, to activate a network of critical reflection and discussion that had been deemed crucial to develop, particularly in the national territory. The first edition of IMMER launched an invitation: for rethinking the museums from the problematization of educational and research practices, focusing on the exploration of dissident and transformative educational processes, consistent with more democratic and socially engaged values.

Within the current framework we recognize a change concerning the discourses that are part of the institutional policies and programmes, which seem to want to dissolve the traditional symbolic barrier between the museums, and their local contexts, and the people. Programmes are being presented that testify the will to transform the relationships with the publics, that focus on concepts of collaboration, activism and social change and seem to appear as alternatives to the still generalised positionings that embrace illusory processes of inclusion, centred on an increase and loyalty of new publics, that perpetuate the disciplining power that the museum diffuses, or superficial processes of participation in which, as Bernadette Lynch argued in the text that she presents, “the participants are, in reality, treated as passive beneficiaries rather than active agents”. Within this ambiguous and conflicting scenario that describes the current policies and practices it is important to rethink the educational component in institutions and to explore its alternative relational possibilities and the potentialities of change that can be unleashed. In this sense it matters to question: how can the educational space in museums create a common space, i.e., of creation of shared meanings, where the differences, the approaches and the singularities of those involved in the relationships are exposed and discussed? How can it become a space for active solidarity, in which possibilities of agency substantiate movements of justice and social change? In fact it is relevant to examine the proposals that are currently enunciated and to question ourselves about the narratives in which we are involved, to understand what they in fact translate and which effects they produce in order to, from there, reflect on how we may position ourselves for the change and what tools to use within the existing conditions: do our practices effectively inscribe inside a transparency frame in what concerns the real involvement of the people, where the differences, the confrontation, the divergencies and the natural conflicts of relationships are accepted? Just as Bernadette Lynch proposes: are our practices “Passive or active? Empowering or disempowering? Operational or performative? Pity-porn or social change?”

The challenge will be to think of the museum not only as a space open to the outside, where one is invited to be a part of, but in a more implied way, as a place where a part is taken; not only as a space for meeting or consultation, but where cross-lines of knowledge and experiences flow from the intervening agents involved in the construction of new meanings and actions; not only as a place for consensual dialogue but as a place that accepts and enhances confrontation and conflict in the involvement in decision-making.

For the challenge launched by IMMER, researchers and professionals from the fields of education, artistic practice and curation came together as speakers at the meeting, presenting their dissertations and experiences, inciting discussion and making visible several educational approaches in museums and points of questioning around alternative relational possibilities. This sharing didn’t have the objective of finding definitive answers or solutions for acting. Instead, and starting from the proposed thematic field and the particular frames that were being exposed, it aimed to create arguments capable of generating joint discussion with the participants, considering the urgency to explore what is not always easy to reveal – the challenges, the tensions and the conflicts –, traditionally occult, but of extreme importance in the sense that it is from an open and transparent reflective frame that it becomes viable to envision a change in the future, i.e., it is by recognizing the challenges and the conflicts that new change enhancing practices may arise – like Janna Graham questions in her text, “how can our uneasiness become the site of our research and from there the source of our interventions?”

From the common will to register what happened at IMMER #1, from that laboratory for the construction of shared, intertwined meanings, that we have sought to create, came the idea of compiling the voices, expressions and manifests that occurred. To that end, we have decided to organize the texts in the publication according to the sequence presented in the programme of the meeting, in an attempt to mirror the movements gathered there. It is important to note that, given the specificity of each text in what concerns the style of bibliographical referencing, we have opted for respecting the organization and the style established by each author.

We would like to express here our deepest appreciation to the authors that so willingly acceded to our request for collaboration in the meeting and the publication. And a special thank you to i2ADS – Research Institute in Art, Design and Society, to Faculdade de Belas Artes da Universidade do Porto and to Fundação Museu do Douro for welcoming the project, which anticipates already its second edition, a thank you that is extended equally to all the collaborators and stakeholders that were involved and made possible this first meeting and this compilation of texts that seeks to activate an extended, continued and situated reflection dynamics.

IMMER was conceived with the purpose of creating a time and a space dedicated to the sharing and confrontation of experiences, in a broadened perspective of the interpenetration of discourses between theory and practice, focused on the educational territory in museums or other cultural structures – about its practical possibilities, assumptions, challenges and setbacks. On the one hand, it aimed to establish an informed field of practices and projects that have been referenced at an international scale and, on the other hand, to activate a network of critical reflection and discussion that had been deemed crucial to develop, particularly in the national territory.